The Sinister Sounds of Stanley Kubrick's A Clockwork Orange 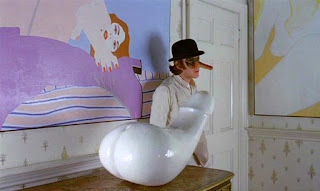 In Stanley Kubrick's film adaptation of A Clockwork Orange, our narrator Alex; a violent thug and rapist, is conditioned to react against classical music as a byproduct of an experimental treatment to rid him of his anti-social tenancies. Upon hearing Beethoven's Ninth Symphony Alex immediately becomes extremely nauseous. This is an example of Pavlovian conditioning, whereby an association is created in the mind and a learned response is developed through repeated exposure to a trigger; which in this case was Beethoven's music.
Ludwig Van Beethoven-Ninth Symphony (Second Movement, Abridged) 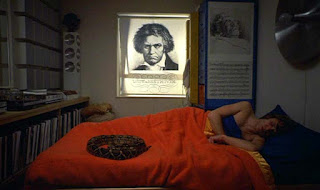 A similar phenomenon occurs in the viewer's mind; as the film's most violent moments are set to music, one begins to associate that music with the violence. For example: a brutal rape occurs whilst Alex sings "Singing in the rain", one of the most positive and innocuous songs ever written. Born of this, an association between that song and this act of violence is created. This is Kubrick's intention, and he uses the medium of cinema to best demonstrate the point made by the story about the powerful psychological affects of music. That scene is so horrific and memorable that in my mind that song is forever tainted by the film, and linked to a depiction of violence, despite the fact that the song itself is an uplifting tune about overcoming obstacles in life.
Gene Kelly-Singing in the Rain 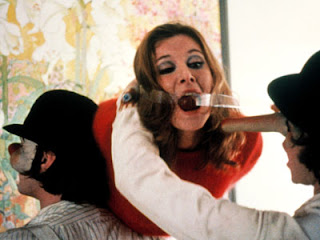 The title music for the film was composed by a transgendered musician named Wendy Carlos (born Walter Carlos) who rose to fame preceding the film with his/her recordings of Bach tunes played on a Moog Synthesizer. It is one of a few original tracks composed for the film. More then any other composition on the soundtrack; this track directly communicates the atmosphere of dread and paranoia created by the film.
Wendy Carlos-Title Music For A Clockwork Orange

The scene below is a perfect example of the use of music in the film to provide an unsettling counterpoint to the action on the screen. For me, this film has forever associated classical music with violence; but perhaps the film didn't create-but rather it exposed an association which had existed all along.

It's always astounded me that folks who are into more aggressive genres (hard core, punk, metal) don't explore more classical music. You take some of those Mahler, Beethoven or Shostakovich symphonies and listen to them and those guys build up some pretty spectacular levels of intensity and, arguably, violence in their compositions.