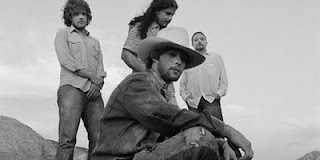 Ryan Bingham is from Hobbs New Mexico and is the next best thing to happen to country music. He is 28 years old and sounds like a man that has been on the road whiskey drinking and hard living for 25 years. One critic said he sounds like Steve Earle’s dad. Ryan did not start out as a musician he started out on the road on the bull-riding circuit in his early teens. Lone Star music a music company with 12 employees based out of New Bruanfels Texas provided Ryan with the money for his debut album in 2006. The major labels quickly noticed him and Lost Highway Records signed him and he recently finished and is touring for his second album with them called “Roadhouse Sun”. Below is one of the new songs done acoustic in a radio studio but don’t get the wrong idea when Ryan Bingham and the Dead Horses play live shows it rocks.