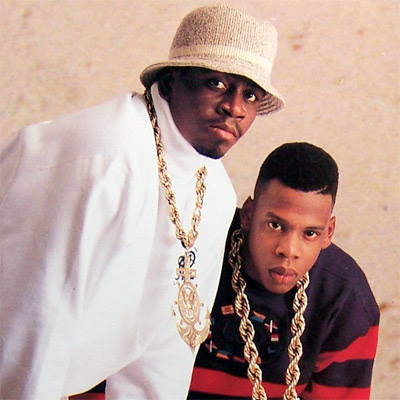 Everybody's gotta start somewhere, hell we don't even have a domain name yet, we still gotta blogspot URL. As I've been obsessing over Jay-Z's new song "Run this Town" in anticipation of his new album The Blueprint 3, I was alerted to this video that shows a young Sean Carter before he grew up; back when he was backing another rapper named Jaz. The native tongues vibe and the high top fade hair cuts go with what was popular in 1989, a whole seven years before radically reinventing himself with his '96 classic Reasonable Doubt, which many hold in the top five rap albums of the nineties, and surely one of the strongest debuts of a future star.
Seeing how different Jay-Z is in this video to what he is now showcases what one could say is his greatest strength, his ability to adapt to the changing culture and assimilate his personal style to the times. He went from pop rapper, to hardcore gangta rapper, to popstar over the course of a decade and a half. To have started here, and ended up where he's at now, is testament to his versatility as an artist. He's like rap's David Bowie without the drugs and missteps. I think this is the fastest I've ever heard the dude rap, and it sounds good.I don't think he could've come up with this one without writing it down.

Hova's sweatshirt with the international flair is priceless