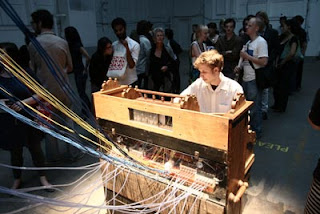 David Byrne has created a strange new musical instrument. It is his latest project and it is called “Playing The Building”. He has turned the Battery Maritime Building into a musical instrument. It took him three weeks to turn an antique organ into an elaborate machine that through a series of devices will play the elements of the building. As a musical project it is visually impressive as well. New York is his third stop; he first did Stockholm and then London. Playing the Building will be on display at Battery Maritime Building in Lower Manhattan until August 24th.