An Ethereal Evening with Bat For Lashes 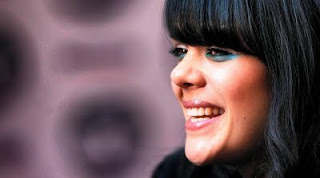 Bat for Lashes is touring the United States for her new album “Two Suns” and made a stop at the 9:30 Club last night. Natasha Khan the 29 year old British women performed a show that was not just musical but a visual spectacle. The décor onstage was a tiny statue of Jesus on the corner of her piano, a little lamp emitting a red light, two porcelain angels with glowing wings, a giant tapestry of a wolf howling at the moon, and an arrangement of lights. The music consists of Natasha and others on the piano, harpsichord, zither, bass, drums and the autoharp. She has a range with her voice that is absolutely remarkable. Such instruments such as the harpsichord and auto harp gave the music a medieval tone but at other times there were electronica type beats that made you want to dance. Some of the music had an eerie almost frightening quality to it, as if you were lost in dark woods and could not find your way. The drum beats were performed with mostly mallets and the basslines were very prominent.

Natasha added an element with her strange religious iconography onstage and with the many different lights the bodies seemed celestial. Natasha has been quoted in interviews saying that when she looks at the crowd she sees pine trees and sky. Nature is central to Natasha and her show, when asked by and interviewer what in nature inspires you she responded:

“I feel drained thematically if I'm in the city too long. I think that when I'm in nature—for example, I went to Big Sur last year on a road trip and just looking up and seeing dark shadows of trees and starry skies really gets me and makes me feel happy. I would sit right by the sea, and any time I have been a bit stuck I will go for a long walk along the ocean and it's just really good to see vast horizons, I think, and epic, huge, all-encompassing visions of nature really humble you and give you a good sense of perspective and the fact that you are just a small particle of energy that is vibrating along with everything else. That really helps.”

Natasha and her performance are fueled not only by musical arrangements but by visual imagery, nature, and a spirituality that really ties it all together. For the encore she came out and sat in front of her zither to play a few songs without any backing from the band for a few solemn moments. Then for the last song of the night she played the new hit single “Daniel” off of the new album.

I'm impressed you were able to effectively review this show without referencing Bjork or Tori Amos.

Definitely outside my norm, but an enjoyable evening. When she gets into the high range of her soprano, it's something special.