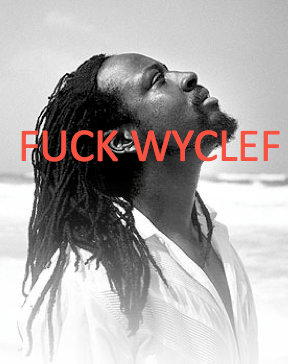 Last week the world was dealt a terrible blow. An earthquake ripped apart Haiti, the death toll now reaching over 200,000. The worst earthquake in hundreds of years and the most deadly natural disaster in my memory. It's a terrible thing, and if you can, please text "Haiti" to 90999 and donate $10 to the American Red Cross. They need your help. Whatever you do, don't by a Wyclef Jean album.

Wyclef Jean may be the only famous musician you know of from Haiti, but he sucks and this tragedy isn't going to change that. When I first saw him asking for donations on TV, I was glad to see he was lending his time and celebrity to this worthy cause. But then something else happened. I started hearing him singing in the background of one, then two, then I don't know how many commercials (it's happened 2 times since I started writing this) and I was reminded anew of how annoying that motherfucker is, and how much his music sucks, even when he's covering Bob Marley's simplest songs.

Something terrible happened, let's prevent another tragedy. He's creeping back into our collective consciousness and I don't want him there. I don't want him to be for Haiti what Bruce Springsteen was for 9/11. Let's stop this as it's starting! I may be the only person to notice this crime of culture as it's happening, but my biggest fear is that this goes unnoticed, and 15 years from now he gets inducted into the rock and roll hall of fame and my grand-kids think he wrote "No Woman No Cry." Let's not let him benefit from this terrible event by becoming unwilling fans. Firenze warned me that it was too soon to write this kind of piece related to such a terrible tragedy, but fuck it, that's why we used pseudonyms. And trust me, I have a lot worse things to say, but I'm holding back.

Throughout this terrible tragedy, give all you can. Pray for the Haitian people. And remind your friends and coworkers how much they hate Wyclef Jean.
Posted by Inigo Montoya

Nothing tragic about a bunch of sub humans getting killed. Fuck Haiti and fuck ALL NIGGERS