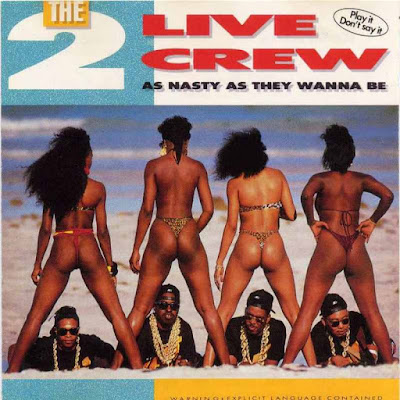 2 Live Crew's 1986 album As Nasty As They Wanna Be is kinda mediocre considering all of the controversy it generated at the time. It sold 2 million copies, and was the first record EVER to have been determined legally obscene in Florida (a ruling later overturned by the Supreme Court). Am I just desensitized, or is this album not really as nasty as it ought to have been to have garnered all this attention? I mean, its obviously one big joke. NO ONE can be serious when they rap: "If you could wear a dick bitch, you would flaunt it" which is an awesome quip for sure, and a very valid point, but really though? My complaint against these fellas has more to do with their rhyming skills than with their content, I can say fuck shit bitch all day, but when you throw "Pussy" and "Cock" at the end of almost every single line, I start to think that 2 LIve Crew weren't really living up their postential to be as nasty as they could have been. It's too easy to rap using those words, as they rhyme with just about anything. To be able to build fluid rhymes out of phrases such as "engorged clitoris" or "unprotected dicksmacking" requires a more poetic soul, and if utilized within the right context could've stood to create something truly filthy.

I think the best part about this album is the fact that J.P. Stevens heard it, and ended up loving the album so much that they all became friends. Here is a candid shot of him posing with 2 Live Crew while the whole gang frolicked on the beach together in Miami chasing bitches (see below). 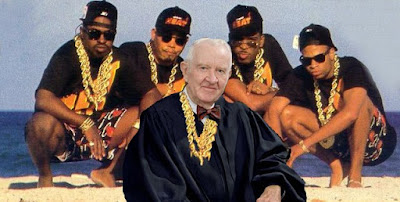