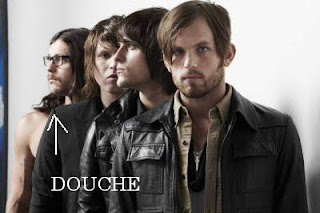 Warning: rant. I'm going to offend a couple people with this one.
I first heard of Kings of Leon in 2007 when I was first becoming familiar with the new methods of browsing and was particularly enamored with Metacritic because of its ability to combine a number of reviews into a nice and easy numeric rating. I downloaded their Because of the Times album and played it once on a long road trip. The album was fine. Never really went back to it or gave it another thought.
When KoL reemerged in late 2008 with Only By The Night, all of a sudden everyone was all over this band's shit (in the US; they've always enjoyed popularity elsewhere, particularly in the U.K. and Australia). Something clicked and they started riding the hype wave and "Sex is on Fire" and "Use Somebody"were on repeat in bars throughout the first half of 2009. I, too, enjoyed those songs the first 87 times I heard them, but still wasn't a big fan of their album. I didn't understand the phenomenon.
This is when it starts to go bad. Stories began flowing in about the band's rockstar antics. I heard a story from a friend who attended their concert in Philadelphia that the lead singer "thanked" the crowd "for finally catching on". Then I caught word of the disaster at the Reading festival in which Kings of Leon threw a temper tantrum resulting in telling the crowd, "Fuck you. We're the goddamn Kings of Leon" before smashing their guitars and flipping the bird to the crowd while storming off stage. This would be totally awesome if they were Guns and Roses, but they aren't. They're a mediocre-at-best rock outfit, and a bunch of whiny pussies (especially the shirtless pedophile pictured above - no, I never took the time to match their names to faces).
A friend put it best when he told me "people like me, who dont know much about music or appreciation think that liking kol makes them have an understadning (sic) of new age rock/hipster movement." This makes perfect sense. These guys represent an easy access point to new wave rock and hipsterdom for the general populace and they carry that flag with an air of pretense and over-inflated self-worth. And instead of bridging that gap and bringing good rock to those that don't spend hours surfing the blogosphere and Brooklyn concert scene, they give musicians a bad name.
Their latest super-edgy move is the release of a Kings of Leon- branded clothing line. This will thankfully inform all their wannabe hipster fans what gear they should be wearing when they want to have sex on fire. I understand the connection of clothing to music when its representative of the culture (i.e. hip-hop, disco, etc) . However, the spirit of rock and roll has never flourished in conformity. If anyone actually buys these clothes it will be for all the wrong reasons.
Kings of Leon represents a movement that I personally cannot stand. A band that holds image over substance. Scouring the internet for information on these guys usually results in more photo shoots than earnest reviews or articles. Really, the fact that these guys are selling a red bandana for nearly $100 and and a necklace for $270 is mind-blowing.
Well here you have it folks: KOLxS2A clothing line. I'm pretty sure this is clear proof that the world is coming to an end in 2012. Next up, KOLxS2A male nipple rings and tongue rings on the shelves at Hot Topic.
Posted by scholar/gentleman