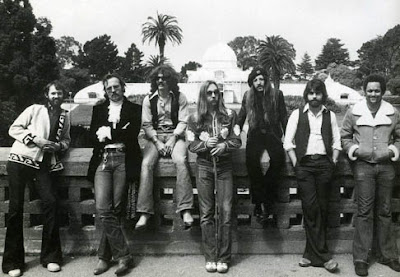 What a Fool Believes was co-written by Michael McDonald (second from right, above) and Kenny Loggins, a pairing which proved fruitful enough to produce one of the most touching love songs of 1978. The song raced up the charts that year to hit no.1 on the Billboard hot 100; and won two Grammy awards that year as well. The lyrics are written in a third person narrative about a man (the fool) who comes to sadly discover that the woman with whom he once had a relationship with, was never really all that into him. Even though she politely tries to break things off with our noble protagonist, nothing seems possible to disuade this 'fool' from continuing to fantasize that he can still gain a relationship with the object of his desire. Its a delicious slice of blue eyed soul which has stood the test of time on light FM stations throughout the years. The pleasant atmospheres of many a supermarket and drugstores are a result of McDonald's contributions to popular music with The Doobie Bros., Steely Dan and his celebrated solo career. Below I have embedded the disco remix of the track which has an added kick to the song's rhythm section, enjoy!

The Doobie Bros.-What A Fool Believes