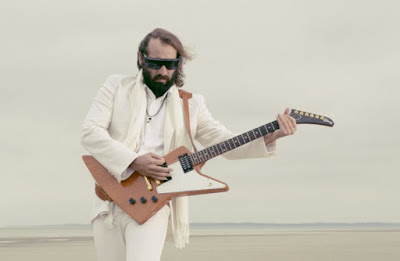 This song is a fucking gem. Sebastien Tellier's Sexuality album was produced by Guy Manuel de Homem-Christie of Daft Punk, and he pushes Sebastien to use more synthetic sounds on the album than he had on his previous releases. The entire album slinks along with subtle grooves and a few more upbeat numbers, and everything on it is good; but this is by far my favorite song. This video compliments it well. When was the last time you saw a beardo playing piano on a deserted beach at sunset while wearing a white suit? Priceless.

Clearly Tellier doesnt take himself too seriously, this video is far too over the top to assume otherwise. However dont let his campy nature fool you. The man is an accomplished musician. I watched him perform at Le Poisson Rouge in the West Village last March, and his talent blew me away. He came out onstage, wearing his white suit, sweating profusely, and holding a flying V guitar which he proceeded to shred mercilessly for a five minute face melter guitar solo. That was the first thing he did when he got onstage. He switched off between the guitar and a giant piano a few times, and one of the highlights for me was when he pointed the mic at his crotch and declared that "Zis next song is about my misexuality" in a heavy french accent. It made everyone uncomfortable. It was one of the best concerts I've seen this year. You can cop this song off my first mixtape (scroll way the fuck down if you wanna find it.
Posted by Blaquin Phoenix