AA Bondy: Live at the Rock and Roll Hotel 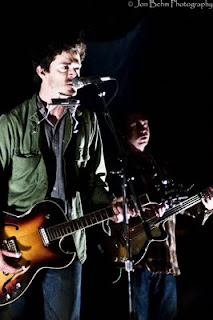 A.A. Bondy has created two albums of folk songs that are achingly good, his songs reflect an older matured artist. His tunes are heartbreaking but within each one a small ray of light shines through. He is currently touring for “When the Devil’s Loose,” his second album which has been receiving critical acclaim.

He hit the stage accompanied by a bassist and a drummer who also played the steel pedal guitar at the Rock and Roll Hotel on Thursday night. The song “Slow Parade” has a soft warm start with lyrics about the sea “talking sweet to me” and it builds with an distorted guitar becoming angrier and darker as he speaks of waves crashing around him.

He switched back and forth between a wide body electric guitar and an acoustic which made for a nice dichotomy of sounds. The biblical imagery he incorporates into his lyrics makes his songs sound like they were from an earlier era. His raspy and imperfect vocals add an authenticity, creating a sound which is truly his own.

Between songs Bondy told stories, which gave his performance an added value. At one point, He spoke of an experience he had in Alabama walking his mother’s dog:

“I was out walking my mom’s dog and some other dog that had escaped from its electrically protected home tore my mom’s dog eye right out of its socket. She is ok though, I saw her and the eye was all sewed up. It was like out of a Fellini movie.”

He also told weird stories from the road:

“I was leaving Chicago and was under on over pass that was under another overpass and I saw a homeless man with a shopping cart full of his stuff. He was talking to a female cop. Then I noticed the female cop…well… she had an axe. AMERICA!.”

Bondy is a giant in the alt country music scene right now. It's easy to see why, with his poignant lyrics and a showmanship. He gives hope that folk music in all its glory still has artists out there who are keeping it alive and well.

After the show, Bondy came over and sold his own cds and tee shirts at his merchandise table. He talked with his fans, gave autographs and thanked everyone who came to the show directly. I spoke briefly with him about living in Brooklyn, but he proudly stated he spends most of his time in Alabama, where he is originally from. He said he liked working with Fat Possum Records and is hopeful about the future. I also asked about his name, wondering what A.A. stood for. He told me that it stands for August Arthur, the name given to him at birth.

AA Bondy - When the Devils Loose

yes, this is good stuff. I wish I could have been at the show. I bet he sounded good in the R&R Hotel.

There's still that sort of strained/indie quality to his vocals that sounds like so many other guys. It's like there's a button they push in production to make them sound that way.