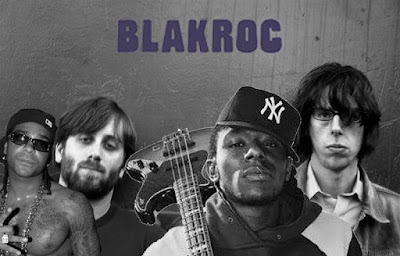 Rap-Rock Crossovers have been happening since Run DMC teamed up with Aerosmith for 'Walk this Way'. We can blame the desire to blend these musical art forms for Cypress Hill's "Skull and Bones" album, Limp Bizkit, BodyCount, amongst countless others. The trend continues however, and thus we now have Blackroc, a project spearheaded by Dame Dash and featuring the Black Keys performing with various rappers. This first track off of the album features Jim Jones and Mos Def. It almost makes sense. Jones hopped on MGMT's hit 'Electric Feel' to add 16 bar verses for an unofficial remix last year; and Mos Def did put out the iffy "New Danger" album, which was a disorganized mish-mash of rock and rap stylings. What doesn't make sense is that the Black Keys are involved, their muddy minimalist blues rock doesn't owe anything to Hip Hop; but suprisingly, this seems to work.
Blackroc-Hoochie Coo