Teru'Ah-Edward Receives A Letter From An Old Friend 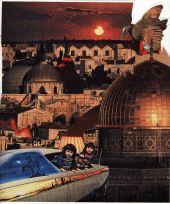 Here's a jam from our friends Teru'Ah who released Mad Kids in the Holy City around this time last year and we've yet to give them some well deserved shine. Although singer Mike Cades's lyrics are melancholy, they exhibit a degree of wisdom which may belie his age. This is especially true on "Edward Receives A Letter From An Old Friend" a song about the banality of the average man's life, and the seeming inevitability that one's dreams will inevitably be over-run by daily responsibilities until they die.


"If we are reasonable men, its seems absurd to expect anymore than
an ill-tempered life."

The excellent production and instrumentation of this track gives Cades's lament a bittersweet quality: a quiet mandolin sets the tone, as the track builds upon a brass band to reach a subdued coda that audibly expresses this sad story of a life filled with regret. Poor Edward.

Teru'Ah-Edward Receives A Letter From An Old Friend