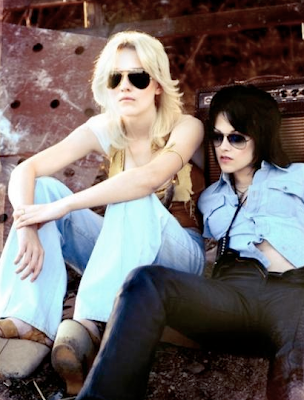 Before I get started, please read this and forward it quickly, because I just have an idea some of these pictures (one in particular) are gonna get flagged and we might get shut down for a couple of days. Without further ado…

Finally, and after much anticipation, The Runaways, directed by Floria Sigismondi and starring Kristen Stewart and Dakota Fanning as Joan Jett and Cherie Curry, respectively, has been released (actually I’m surprised to see how little anticipation there has been.) In my earlier post on the film, I talked about how this film would really be about whether the two starlets could pull off such adult roles after building names for themselves as American PG sweethearts. That remains the only story to tell here. The film was lacking a lot, but it sure as shit wasn’t lacking a performance from either of these two. Both did an awesome job and definitely changed the way I’ll look at either one moving forward.

If I give Sigismondi credit for anything in this film, she had the balls to push the envelope with these girls and convinced them to do some stuff on camera that I never would have thought they’d be cool with. We meet up with 15 year-old Cherie Curry as her legs are dripping with the blood of her first period on the Sunset Strip, on her way to a random hook up with a random guy in the back of his car. They don’t hold back on the drug front, either. My favorite scene is when the girls are en route to Japan and the rodie tells them they’re about to land, so, “if you have any drugs, get rid of them.” Curry and Jett head to the bathroom where they proceed to shovel mountains of blow from their palms, straw free up their noses and onto their tongues, and pop whatever pills they can handle. Ahh, to be a 15-year-old rock star of the 1970’s (sorry, I couldn’t find a picture from this
scene.)

Joan Jett is an angry young punk chick, hell bent on changing the face of Rock and Roll at any cost. She’s sick of being told that Rock and Roll is a man’s game and 20 minutes into the movie, I was sick of being reminded of how unfair that is. There is no point in the movie when you aren’t reminded, either by a menacing crowd, Kim Fowley, or Jett, that people don’t want to see girls play rock and roll and that The Runaways have to shove it down their throats. It gets a bit annoying, but not thanks to Stewart who personifies the future Rock Goddess impeccably. From the awkward, developing teen that can’t yet play the guitar, to the fully formed leader of the band, with a mastery of her instrument and the art form, Stewart evolves and grows with the character seamlessly. She manages the tough-guy persona as leather clad leader of a kick-ass punk band without sacrificing her femininity, which really comes across during tender moments between Jett and Curry. Kristen, you really kicked ass here.

Having said all that, Dakota Fanning definitely takes the cake in this film. I’m not surprised that she should be capable of delivering such a stellar performance, she’s been getting nominated for awards since she was a little girl in 2001’s “I am Sam.” What surprises me is that she’s managed to translate her skills as a convincing and heartbreaking child actor to the role of a drug addled sexpot. What’s more, in the role of Cherie Curry we get to see this evolution of a character play out on screen. A better metaphor for this transition than the aforementioned “first period” scene would be tough to come by. When Fowley and Jett spot Curry in Rodney Bingenheimer’s on the Sunset Strip sipping Mountain Dew, she’s still a young girl with stars in her eyes but no marks on her soul. From her botched audition for the band to her ownership of the tough as nails sexpot (a role in which, it’s worth mentioning she did her own singing,) to the washed up drug addict less than two years later, you never get the feeling that she’s faking it. And she’s hot! Fanning has always been adorable and loveable to moviegoers but in this role she needed to shatter her girl-scout next-door persona, and when she’s rocking out seductively onstage in signature Cherie Curry Lingerie, she blows any preconceived notions about her innocence out of the water.

Perhaps the most effective aspect of her performance is not that of the drug addict or the daughter of an alcoholic but that of the fucked up kid discovering herself in a relationship with Joan Jett.

You get the idea that Jett is less than straight, but for Curry, the attraction is less about girls and more about Joan. Joan Jett discovered Curry at a real low point in her life and gave her a purpose. She told her that just by being, she was a superstar and what’s more, she turned her into one. Curry couldn’t even sing before Jett and Fowley came along while Fowley’s help came from a place of greed, Jett’s came from a place of love and adoration.

While we’re on the subject, let’s get into the character of Kim Fowley and his portrayal by Michael Shannon. I couldn’t possibly end this thing without ripping someone apart, right?

While the character of Kim Fowley is undeniably integral to the telling of this story, his representation both in the film as it’s written and by actor Michael Shannon is fucking miserable and one of the film’s biggest drawbacks. While Fowley was definitely an over the top eccentric, the overacting on the part of Shannon shatters any chance this film had at being taken seriously. He is caricatured at best and if at any point you start to enjoy the crazy ride The Runaways are on, he is right around the corner to spoil it for you. I literally went through 2 minute periods that started with me loving the film and ended with me wanting to get up and leave. He just fucking ruins it.

Director Floria Sigismondi may have fumbled here but how can you really blame someone who’s previous directing experience includes only music video compilations for VHI? I want to know who’s job it was to pick such an inexperienced director to direct such an historically significant film? The woman uses headline montages to compress time for crying out loud! The Runaway’s first major show was opening for Cheap Trick at the Santa Monica Civic Auditorium, but Sigismondi shows none of the bands the girls opened for on their way up. In fact, though this film is about a revolutionary time for Rock and Roll, no music from the era is featured in the film, save a few selections of The Runaway’s music and some Joan Jett songs which came out a couple of years after the film’s conclusion. If Sigismondi had chosen to take advantage of more of the music that inspired Jett and the band they may have been inviting a whole demographic of movie-goers who will surely sit this one out.

All said the movie was sub-par. I have to admit I walked away a little disappointed. There was so much I would have changed, but it’s been a few days now and I can’t get Dakota Fanning’s or Kristen Stewart’s performances out of my head. They didn’t have much to work with, but man, they made the most of it. Two thumbs up or tomatoes or whatever the fuck you prefer, for both of them.

Here’s to hoping “The Dirt”, whenever it comes out is in the hands of a capable director, and a few actors as talented as these two stars.

Is it wierd that i find that period blood shot really hot?