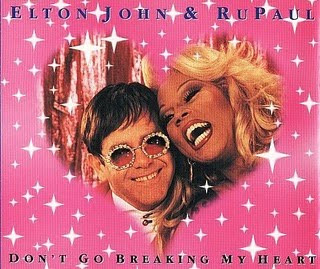 Personally I enjoy the original version more (when Elton duets with KiKi Dee) but fuck it, that song doesn't have a video as colorful as this one. I've found myself daydreaming/wondering what happened to RuPaul, and whether RuPaul went back to being just Paul after his/her 90s heyday...but ive been informed that he is still a very very fabulous She on his very own television show called RuPaul's Drag Race, check your local listings!

i've seen her on tv a lot lately, she's always dressed like a guy now