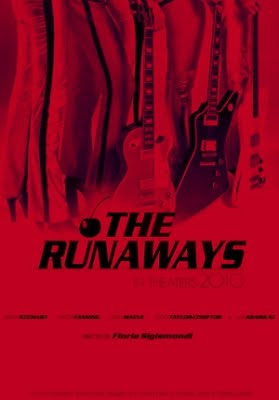 To most Flock Alone readers it’s no news flash that a biopic of the original all girl power punk band, The Runaways is in the works for 2010. That being said we’ve written nothing on the topic and it’s about time we did. The film is based on lead singer Cherie Currie’s book, “Neon Angel” about the meteoric rise of the world’s first all girl punk band. Readers unfamiliar with The Runaways might remember their first megahit “Cherry Bomb” or at least Runaways guitarist Joan Jett’s solo smash hit “I Love Rock and Roll.” As a classic punk enthusiast and avid moviegoer I think it’s about fucking time that a commercially viable film about the early days of the American punk movement was made. Would I rather see a gritty story telling of the genesis of New York Punk in Max’s Kansas City and CBGB’s? Of course I would, but I’ll settle for the sexier, needle free story coming out of LA right around when all the genre’s founders started either OD’ing, killing each other or ending their careers in prison.

The real story to watch here may be that of the movie’s stars. Teeny boppers Kristen Stewart and Dakota Fanning play the lead rolls of Joan Jett and Cherie Currie, respectively, in their first films as sexy adults playing sexy adults for the enjoyment of adults. The obnoxiously popular Twilight series may inspire hipsters nationwide to protest the selection of Stewart to play the iconic Joan Jett. But the same hipsters need look no further than this summer’s Adventureland to see Kristen Stewart demonstrate her dramatic range, as well as her innate ability to inspire a hopeful hard-on in the oddest of oddballs. It’s easy to point fingers at the suddenly successful, but this Flocker is making a call, Kristen Stewart is as talented as she is hot, and the best candidate to helm a young Joan Jett’s “fuck me or fuck you” persona. 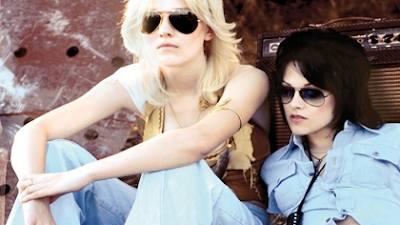 As for Dakota Fanning’s selection as lead singer, Cherie Currie, it’s tough to say how moviegoers will react. Love or hate the Twilight movies, Kristen Stewart enjoys the benefit of having entered the public arena as a love interest, teen or not. Fanning made her first impression on most of us as the adorable baby girl of a retard in I Am Sam, and despite her undeniable talent, most viewers will have trouble looking into that face and seeing anything other than that adorable little girl. Her success or failure relies on the aforementioned undeniable talent. Dakota Fanning’s selection of this role was no doubt a deliberate move to reintroduce herself to the world as an adult you don’t have to be a pedophile to find hot. It remains to be seen if the world is ready to see her that way.

Three things are certain to come of this film. For one, a fuckton of money. Stewart’s and Fanning’s last collaboration on Twilight: New Moon has brought in nearly $300 million in the past month alone, proving the two are financially viable, whether or not the movie sucks. Secondly, you can count on a lot more teenagers taking an interest in 70’s era rock and punk, which is probably a good thing for those of us old geezers sick of hearing the shallow crap that floods the airways these days. Third and most importantly, the trial by fire of two young ladies soon to find out if their acting careers have a future after high school.

fuckin retarded the video is blocked