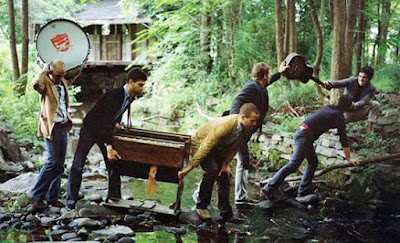 When I first saw this band live, it was at Bowery Ballroom and Vampire Weekend opened for them. Goes to show how unpredictable the music business is, I know this band is rated, but they're still under-rated and should be playing Terminal Five like Passion Peet instead of still playing Bowery Ballroom (which they do sell out but still). I mean they were on Letterman (twice!), their new album was produced by Spoon...they have two fucking drummers...why aren't they bigger then Vampire Weekend. The world is cruel and unjust.

Yesterday I got a message on myspace from the White Rabbits and at first I thought...Oh shit, they wanna hang out with me, sweet. But no, actually it was for a myspace live ep that they put together...I'd link you to that, but its not on their myspace page for some reason. Oh well, here it is....