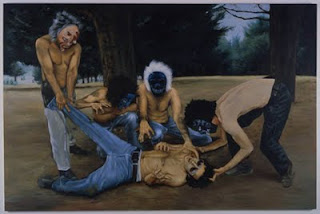 Miguel Calderon is a Mexican artist that expresses life though crass and sometimes disturbing images and ideas. His art gives gritty realism a mystical quality and Calderon's approach is very innovative. He has been in the spotlight for about ten years now with exhibits in the Guggenheim in NYC and San Francisco’s Art Institute the Diego Rivera Gallery. He is most famous actually for a series of pieces titled “Aggressively Mediocre” as they were shown in the Wes Anderson movie Royal Tenebaums, the piece that you may remember from this is at the top of this article. Here is a video of him discussing the various projects he has been involved with. 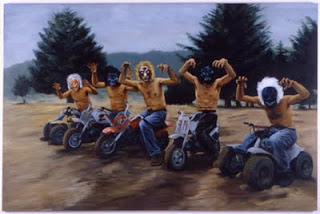 His most recent work is the most political charged piece yet and delves into the sad realties of the violence that exists in Mexico because of the Drug War. He is collaborating with George Kuchar, well known bay area independent filmmaker. It will be featured at Yerba Buena Center for the Arts in San Francisco and is called "Tropical Vulture". There is a film that utilizes " lo fi aesthetic" and some photographs and drawings. 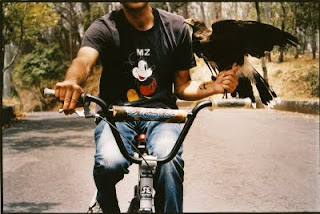