Terrifying: The Requiem for a Dream Soundtrack 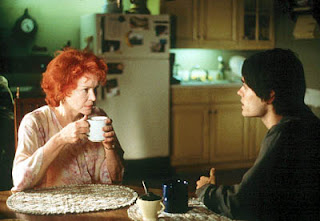 I really enjoyed director Darren Aronofsky's The Wrestler, it was a well shot gritty story about a person who society forgot. Bittersweet at times, I was amazed at the compassion i felt for an over the hill washed up wrestler. Who would think to make such a movie, and who would have thought that it would go so well. I have great respect for this director, however his previous film, Requiem for a Dream is unwatchable for me. In fact I would go so far as to say that no other movie has ever made me feel so uncomfortable, ever. This is in line with a hundred other films I've watched, which most people would consider to be disturbing, Irreversible, Battle Royale, and Caligula...to name a few. Before I saw the film I bought the soundtrack on a friends suggestion, and I feel like I should have known better then to ever see the film. The music is tense, dark, and anxiety ridden. If youve never seen Requiem for a Dream, let these two tracks be a warning to you...if the picture above isn't warning enough.