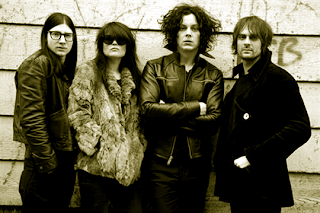 Jack White and his new band The Dead Weather graced the stage at the 9:30 club last Monday and Tuesday night. Having never seen Jack White on stage with his other bands The White Stripes or The Raconteurs. I was eagerly awaiting to see him play, and to hear what his new record label Third Man Records was putting out. This band came about when they'd gotten together for a sort of an impromptu session in Nashville and according to Jack "Things just started to happen. We didn't have a direction. We just went a song a day, two songs a day, whatever we could do and recorded them on the fly... There was no time to think about what it was. It just was." The band consists of: Jack White, Alison Mosshart (of The Kills and Discount), Dean Fertita (of Queens of the Stone Age) and Jack Lawrence (of The Raconteurs and The Greenhornes .

Jack White came out to sit at the drums. and some dirty rock and roll is what took place. Gritty, bluesy, and loud and with Alison Mosshart singing straight from the gut with her cigarette hanging out of her mouth. It’s the kind of music that makes you want to leave your wife and kids go and drink straight whiskey and shoot heroin. The influence of Nashville is something I could defiantly hear. It was not liked by all as I could see a lot of the White fans not knowing really how to get into it and I even noticed one guy turning to his friend and saying “meh.” I thought it rocked hard. It was a little rougher around the edges then some of his previous work but quite a live show. Jack got up out of his drummers seat near the end of the set to pick up a guitar, and played one of the most somber songs of the night which something which the crowd really enjoyed. The friend I went with saying it was “his favorite song of the night.” The encore was of course the single and it was done very well and I was fully satisfied by it all; as for the rest of the fans wearing their White Stripes t shirts I think some of them were a bit surprised.