Moondog: The Viking of Sixth Avenue 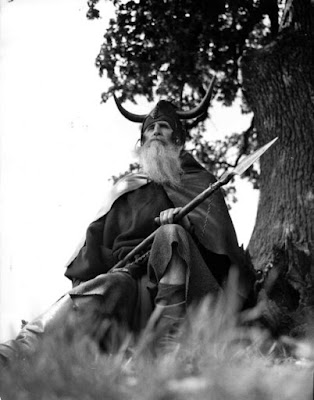 One of music's most eccentric and talented composers of the twentieth century; Louis Harding (aka Moondog) wasn't celebrated for his music until very late in his lifetime. His accomplishments are only more impressive when one considers that he was blind, and what he learned of music theory was gleaned through braille text, and by his own ear.

Before he became known for his music, he was known for his homemade Nordic themed garb that he could be found wearing on the corner of 53rd Street and 6th Avenue in Manhattan almost daily as he sold poems and leaflets on music theory to get by, which he did from the mid forties until 1974. Wearing a hat with horns and a cape certainly alienated him from a public which would only later be able to see the genius which lay beneath this outrageous exterior. 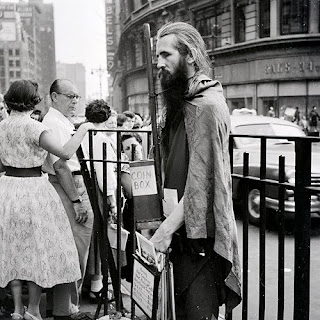 As street poet, composer and inventor of several instruments, Moondog was the epitome of an outsider artist. His early recordings incorporate the sounds of the streets and subways, as well as an assortment of oddly tuned percussive instruments. Although it is extremely inaccessible to most listeners, he managed to catch the ear of the New York Philharmonic conductor Arthur Rodzinski who released many of Moondog's compositions in a series of Eps and 78s throughout the fifties. These early recordings are extremely rare and can fetch up to a few hundred dollars, however the music can be found on a few rare compilation albums which have since been released posthumously. 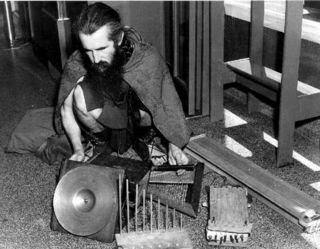 While he lived in New York he managed to rub shoulders with a few major music stars of the time, including the jazz musician Charlie Parker, the composer Phillip Glass, and the actress Julie Andrews (with whom he recorded a childrens album) were all fans and friends of Moondog. But true fame eluded Moondog in the states, and any semblance of popularity was realized only after he moved to Germany in his late 70s. 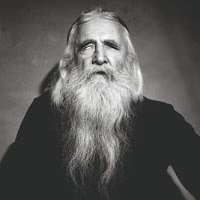 In 1969 at the age of 50 he released his self-titled debut on Columbia Records after being 'discovered' by James William Guercio who is otherwise famous for producing the early albums of the band Chicago, and for playing with Frank Zappa. 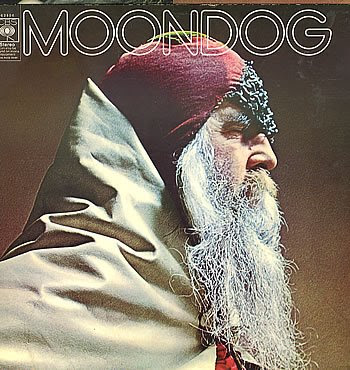 This album is far and away his most accessible record, utilizing a full orchestra, of wind, brass, and percussive instruments. It contains the most fully realized compositions of his that Ive found. Having a full orchestra at his disposal allowed the power, anxiety, longing, and tension of Moondog's music to come through the clearest. Each track builds with tension until it ends, crashing drums are an underbelly to snaking violins and violent horns that scream louder with each burning moment.

Although it is his most accessible song on his most accessible album, Bird's Lament is still an unusual piece of music. Written as a tribute to Charlie Parker, the song find Moondog at his most light hearted and one can hear the influence of Jazz in the intersecting saxophone lines atop the looped string section.
Moondog-Birds Lament


Introduced by a short couplet of poetry. Stamping Ground is a more typical work on this album. A percussive beat marks the track as it beats forward driven by horns which sound ready for a battlefield charge. Makes the hair on the back of my neck stand up.
Moondog-Stamping Ground


This is the song which kicks off the album, 2:34 of mounting tension, as shivering violins louden over a click clacking drumbeat, trumpets blasts layer over themselves until the murmur erupts into a roar that is sustained until it suddenly combusts into silence.
Moondog-Theme