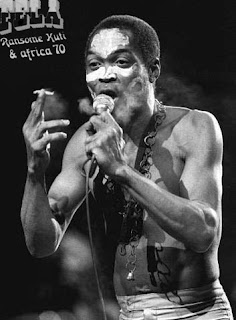 revolutionary as well as a musician) is going to be the subject of an off-broadway musical that Jay-Z will be involved with; and Qtip spins his tracks in the early evening at Santos Party house (where he djs/hosts a hip hop party every friday.

This is all well deserved attention, because besides being the sole innovator of the 'afro-beat" genre (a mix of funk, jazz, and traditional African song structures); Fela was an extremely important figure in Nigerian politics. His music inspired political uprising amongst its people, as well as the ire of the government which tried numerous times to throw him in jail througout his life. The dude even ran for president. I would say that he was the Bob Marley of Nigeria, but he's not that famous, and way more aggressive. This makes him the Peter Tosh of Nigeria in my opinion.

The song below was written after Nigerian policemen came to visit him with a joint which they tried to plant on him so as to arrest him for possession of marijuana. Somehow in the scuffle he was able to eat the joint, but they jailed him anyhow so as to take stool samples to prove that the joint was his. He managed to switch his shit with another inmate's, and got off scot-free in the end. 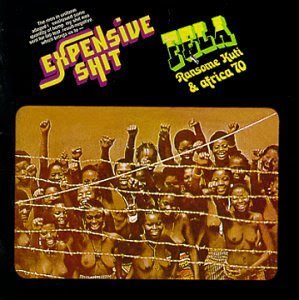 If you watch the video below you can see what an electric performer/showman he was. To try and explain what's going on here, let me preface it by saying that according to wikipedia, he had as many as 27 wives at a time, most of whom were his dancers. Later he had a rotating system of 12 wives at time. So that might explain what's going on here. Or not. Whatever, enjoy watching Fela do his thing in a live performance. The white dude you see at the beginning is Ginger Baker, the drummer from Cream, and a frequent collaborator with Fela.