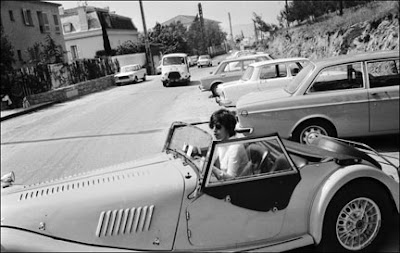 The year was 1971, October. I don't remember the day. The radio of a car parked outside told me the Pirates had won the world series, a 7 game sweep. Though I could hear the game as clear as a bell, our calls for help were either unheard or ignored. It was me, Mick Jagger and this Spanish guy, I think his name was Eusubio, locked in a basement in the Bronx. I never got to find out for sure what his name was, Eusubio was sick the whole time and dead by the 3rd day. Mick and I had eaten some nasty peyote in a sweat lodge 10 miles outside of Reno the previous weekend, the next thing I knew, here we were. Our captors had a speaker playing into the room, "Tighten Up" by Archie Bell and Drells, over and over for god knows how long. It was torture. Mick looked at me and said, "I used to like this song. Now I want to bloody kill myself but they've left us nothing sharp." At that moment, a thin shaft of light spilled through a crack in the boarded up window and onto Mick's face. Right then, and I don't know why, I said to Mick, "May the good Lord shine a light on you. Make every song, your favorite tune." The next day we woke to find the door unlocked, the house was empty and we ran, in separate directions never to speak of the incident again. The next year Mick recorded Exile on Main Street with the Stones, one of the greatest rock albums ever released. I haven't seen him since, but I think about him every day.